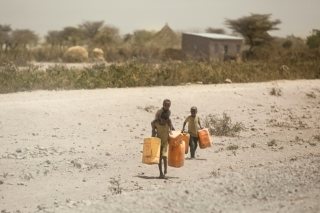 Humanity faces a hellish array of horrors if climate change continues unchecked, according to a new report by the panel of experts convened by the United Nations to inform governments’ climate policies. Sea levels could rise several feet. Fires, floods and famines could force millions of people to flee their homes. Large swathes of the planet could become uninhabitable. And there is a “rapidly closing window of opportunity” for humanity to preserve a livable planet. The report, released Monday by the Intergovernmental Panel on Climate Change, suggests the world must act faster to adapt, rather than simply react to escalating climate hazards. Approved by 195 countries, the publication represents the world’s most exhaustive account of current and expected threats from a fast-warming climate.

The second of three parts, this edition takes a close look at the role of structural inequalities, from the dire futures facing low-income countries to the gender disparities in climate catastrophe. It explicitly calls out colonialism as one of several historic and ongoing inequities that underlie certain regions’ greater vulnerability. Addressing such entangled challenges is “very novel” for the IPCC, but is an area where philanthropy can be particularly effective, said Heather McGray, director of the Climate Justice Resilience Fund. While climate change is a fast-growing priority for philanthropy, massive amounts of additional funding are needed, and McGray and others in the field said the latest report from IPCC underscores that there are critical areas where philanthropy could help drive change. The challenge is that dysfunctional systems are “locking in” risks, McGray said, demonstrating the urgent need for adaptation that shifts such structures. “Philanthropy is well-placed to respond,” McGray said. “As we unpack what the evidence is showing here, it’s going to be a call to action where philanthropy could really play a leading role.” Due to limited funds and the desire to focus on root causes, climate philanthropy has historically focused more on halting greenhouse gas emissions—often through expansion of renewables or energy efficiency—rather than preparing communities for the cascading hazards from climate change. In other words, there is a lot of funding for climate mitigation, but not so much for climate adaptation. Furthermore, funding for mitigation has often targeted leaders in corporate boardrooms and in groups like the United Nations and the World Economic Forum, or supported “false solutions” like voluntary carbon neutrality or net-zero emissions targets, said Tefere Gebre, a labour leader and human rights activist who recently joined Greenpeace as a chief program officer. “In efforts to mitigate the impacts of climate change, climate funders are not doing enough to support community-led climate solutions—despite foundations’ strong commitments to equity, inclusion, and racial justice,” Gebre told IP via email.

Philanthropy in a world of climate migrants

The climate emergency could displace between 200 million and 1.2 billion people within the next 30 years, based on estimates from the World Bank and Institute for Economics and Peace. Philanthropy should pay increased attention to the way climate catastrophes will drive mass migration, Gebre said. “Some foundations have begun to explore work at the intersection of climate change and violent armed conflict, but this area could benefit from a larger injection of funding that would advance priorities across foundations’ grantmaking areas, including health, education, poverty, food security, etc.,” said Gebre, who came to the United States from Ethiopia as a political refugee when he was 15. Attention is growing at this intersection. Unbound Philanthropy, which is known for its immigration funding, released a report last December titled “On the Frontlines of the Climate Emergency: Where Immigrants Meet Climate Change,” which examined the challenges the world is facing, several promising projects at this intersection, and how funders can act. With the new IPCC report underlining the world’s lack of preparedness for current disasters and rapidly multiplying climate risks, foundations would do well to consider reimagining their own operations as they respond, whether that’s with respect to migration or any other issue, said Gebre. “The lesson for philanthropists is that they need to do more to break down silos between their strategies and grantmaking portfolios to address the intersectionality of these issues,” he said.

Ineza Umuhoza Grace is the co-founder and coordinator of the Loss and Damage Youth Coalition, a network of more than 150 members from 40-plus countries who advocate for support for countries disproportionately affected by the crisis. She hopes the IPCC report helps philanthropy understand that inaction on adaptation impacts everyone. “Loss and damages are no longer something that is going to be affecting the Global South only,” she said. “We’re all now going to be affected.” The Global South and low-lying island countries are the most at risk from climate catastrophes, as the new report makes clear. Umuhoza Grace echoed the growing call for philanthropy to look to them for solutions. “There’s no way we are going to [make] a community resilient if you’re not able to work with local actors who are actually on the ground,” she said.

The youth coalition’s own experience illustrates the possibilities and barriers. Last year, the group received support from the U.S.-based Climate Emergency Collaboration Group, which brings together some of the largest climate funders in the world. The youth coalition also works with Climate 2025, a capacity-building organization that serves as the coalition’s fiscal host and helps with financial and reporting requirements. Even with such connections and support, the youth coalition still finds it incredibly difficult to navigate the demands of U.S. philanthropy. “It makes it so hard for us to find the proper foundations to approach,” said Hyacinthe Niyitegeka, coordinator of the youth coalition’s advocacy working group, who is fundraising for the organization.

Historic firsts on adaptation, but next steps are unclear

Philanthropy was involved in a couple small but historic steps last year at COP26, the annual United Nations climate change conference. First, the taboo-breaking decision of Scotland to set aside funding for loss and damage was done with a philanthropic partner, McGray’s Climate Justice Resilience Fund. Second, at the close of the conference, a group of funders led by the Children’s Investment Fund Foundation pledged $3 million toward launching an international fund for loss and damage, a nudge to nations that had resisted any such commitments. While the sums involved were minuscule compared to the need, philanthropy played a key role in both of these symbolic moves. Yet relatively little has happened since. The pledging philanthropies plan to meet later this month, according to McGray, and several other foundations plan to attend that workshop. “It’s moving a little bit slow,” she said. “I wouldn’t say there’s been really clear movement,” Gebre said he was encouraged by the increases in adaptation funding at COP26, particularly by the focus on nature-based solutions and support for Indigenous communities. Whether that will spread remains to be seen. “It’s too early to see how these commitments at COP might influence other environmental funders,” he said. Likewise, it is impossible to say what philanthropy’s response will be to this latest round of grim predictions. But the window for action is rapidly closing.